Next on Elvis Costello Radio...

Makes You Want to Love Theatre (if you don't already)

If I had any followers I could make a more dramatic entrance back into the "blogosphere" (I hate myself for using that word...), but this space is usually reserved for my muted rantings, the digital equivalent to muttering under my breath. But today I'm here to promote something other than my pitiful and self-indulgent hindrances.

A little over a year ago, a friend from college moved to New York to pursue a career in acting. Since then, she has almost literally penetrated the world of theatre by not only participating in actual performances (who knew this was possible?!), but by being an outspoken critic of the current state of NYC theatre (see http://katelyncollins.wordpress.com/). She's positively obsessed.

From personal experience, I can say that Katelyn Collins is a wonderful actor and an outstanding individual. But I've learned that she is also a talented writer and blogger. She recently became a writer for The Green Room Blog, a collective of theatre industry folks who write about New York City life as artists. It's a fantastic look at the bohemian vitality of NYC, but also a guidebook, underscored with realism and humor, of what to expect if you too decide to throw caution to the wind and migrate to the city that (almost) never sleeps.

You don't have to be an actor to enjoy this blog. It's good fun for sure.

Find them at http://greenroomblog.com/
Posted by Robin at 7:31 PM 1 comment: 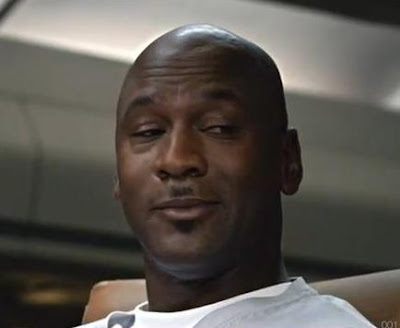 I hope this does not become a trend.
I don't find this offensive, and Michael Jordan can wear his facial hair any way he wants, but the idea of a soul patch gone topside just seems a little unfinished.  Charlie Chaplin's was for comedic effect; Hitler--who honestly ruined this style for anyone who may have had the chance to make it work--had one because he was ordered to trim his bushier, much cooler mustache in order to fit inside respirator masks.  This has never been cool, it's just been indecisive--either you have a mustache, or you don't.  And if I want to be tickled, you better be able to come through.
Posted by Robin at 3:51 PM No comments:

The Sons of Lee Marvin: An Anti-Expose

This is not newsworthy.  We shouldn't even be talking about it.

It is the brainchild of wonderfully eccentric director Jim Jarmusch, who I last saw encircling Jason Schwartzman on a chopper-handlebar Schwinn on an episode of the HBO series Bored to Death.  I originally hoped I would be expounding on some pretty incredible and top-secret information if Jarmusch was willing to discuss it at length, but it did not seem to be the case.

"I'm not at liberty to divulge information about the organization, other than to tell you that it does exist," Jarmusch had said in a 1989 interview designed to expose the intricacies of the society to the public.  Then he went on to reveal the various members, including actors and musicians Tom Waits and John Lurie, the activities of the group such as secret meetings and screenings of Lee Marvin movies, and the only requirement for admission—that the prospective member bear a familial resemblance to the iconic actor.  "Other than that, I can't talk about it," Jarmusch said.

Other members have publicly sworn themselves to secrecy as well, supplying only vague details of the establishment.  In 1986, Tom Waits told Rolling Stone  that the Sons of Lee Marvin falls "somewhere between the Elks Club and the Academy Awards."  From what I can gather, this means it is both a joke, like the latter, and an excuse for aging men to get out of their houses and away from their wives, like the former.  Despite its tongue-in-cheek quality, Waits had professional business cards made.  Now I'm no longer curious; I'm just jealous.

Not everyone has found this funny.  But there is a joke to tell.  One night, Waits walked into a bar.  After a while, the man who had been staring at him all night spoke up:

"What's all this bullshit about the Sons of Lee Marvin?"
"Well, it's a secret organization, and I'm not supposed to talk about it."
"I don't like it."
"What's it to you?"
"I'm Lee Marvin's son."

If you're like me, you're too young to know who Lee Marvin is, and that's okay.  The interesting part about the "secret society" is its complete lack of secrecy.  I don't know about anyone else, but I like the irony of keeping something secret by announcing its existence.  It's exactly the type of thing Jim Jarmusch would cook up in his spare time.

The Beatles did the same thing to the public with the "Paul is Dead" hoax, and it did wonderful things for their record sales.  If you think it's just a trick so they can make money, it's probably not so.  For them, it is a reason to hang out with their friends and watch movies.  For us, it's just entertaining. But if you are interested in making a charitable donation to the Sons of Lee Marvin,  please go rent Stranger Than Paradise, and pick up Waits's Mule Variations at your local record store, or at least illegally download them from the Internet, because you're missing out.  I've already made myself an honorary member because of my undying support of the arts.

To sum up: there's nothing to tell because we already know.  And if you didn't before, you do now.
Posted by Robin at 1:33 PM No comments:

This is what my stepfather gave me to "mow" my lawn

OK, I know it's been a week since we heard the news of our dearly departed Amy Winehouse, and I know the essence of new media thrives on the short attention spans and rapid boredom of audiences--we all know the 140 characters or less on the shooting in Norway we'll find on Twitter is all we'll need to know, so we can skip the AC 360. In short, what happened last week is usually no longer in vogue today.  On to the next one.  And I am certainly aware of how often writers try to emulate the styles of other writers (read any column from the week J.D. Salinger died to find Holden Caulfield), especially someone like Frank O'Hara, and especially this poem, which you will instantly recognize if you haven't already figured it out (who's my readership?  Anyone?).  Here goes:


It is 12:58 in Boston a Saturday
a week and two days after Bastille day, yes
it is 2011 and I’m shelving books
because I’m here until 4:00 at the store
at 6:30 I will get you and go straight to Lowell for a party
and I don’t know who else will be there

I walk down Moody St. now becoming humid
and I smoke a cigarette and unlock my door
and continue reading PUSH to witness the disintegration
of lives of the black and underprivileged in Harlem back in those days
I go on to the liquor store
and see Keir (husband of Kelly) out in back
of the Fusion and I wonder if he recognizes me and
if he does if he’d know who I was
and in Ricci’s I get some Corona Light
for the hot day, no limes, although I do
think of the Magic Hat or perhaps the High Life,
the Champagne of beers, but I don’t, I stick with the Corona
after practically going to sleep to the breeze of the fan

and for Jay I pick up some Andy Capp’s
though I know I’ll probably just eat them
then go back to my car parked in back of Main St.
by the Mobil gas station down the street from the mall
where I casually go in and ask if your discount
still applies to sale items

So, what I've written isn't exactly how I heard the news, but I've used poetic license because I can.  And this is in no way an insult or parody, nor is it meant to detract from the similar yet individual lives and deaths of Lady Day and Amy.  Simply, despite her public antics and personal demons (on which Russell Brand sympathetically and beautifully comments here: http://www.russellbrand.tv/2011/07/for-amy/), she was a supreme talent whose music has been, and will continue to be, greatly admired.  And like all great art, it will be often imitated and, unfortunately, has its genesis in pain.  She will be missed.
Posted by Robin at 3:27 PM No comments:

Why I Hate Cats

Cats are sociopaths.  They pretend to like you, they convince you of their love and then piss on your slippers, they like to walk across your keyboard and change the view of your desktop, and generally sabotage your shit.  They are no kind of friend.

I have encountered cats I've loved, generally those who have been debased to the point where they allow themselves to be treated like dogs.  You know, following their masters into the bathroom when they get up to take a shit, wagging their tails, and letting their coats be petted "against the grain"...

True, cats have personalities akin to any austere, emotionless human being, but their constant licking, spiteful vomiting, and destruction of property have become to me more than just annoying little habits.  In other words, I would never date a cat.

The above cat is no exception.  I used to enjoy watching my cats bat around mice they had found because I felt it a sizable punishment for gnawing a hole in my Christmas stocking, but my cats were always reasonable enough to let the mice go stumbling blind-sided back to their hole.  Cicadas, with their rattling fart noises, have never been a favorite of mine either.  But this cicada did not deserve to be Bear-Gryll'd.
Posted by Robin at 11:34 AM No comments:

Robin
\ˈfrȯstˈyu̇r,ˈa-gēs\ Something that happens as a result of extreme bother or outrage, usually instigated deliberately out of spite. "I can't believe you bought the last cookie for yourself knowing I wanted it. That really frosts my aggies."